Moncho Alvarado interviews Michael Torres, author of An Incomplete List of Names. The interview is part of a series with Latino Latinx authors.

Alvarado: I really love the urgency of An Incomplete List of Names, dealing with questions of language, privilege, and power. How did you approach writing this collection?

Torres: I wrote poem-by-poem, mostly using my speaker to reflect on moments from their upbringing in southern California. I started thinking about the individual poems as a potential collection after writing those memories brought more questions, more inquiry out of me. Questions that kept returning were: Why did we grow up like this? Who taught us to be this way? Who taught them to be this way? The collection really started taking its shape when I’d written the All-American Mexican poems. It was then (late 2018) that I started to recognize the other facets the book was trying to hold. Yes, I was writing about home, but also about leaving home and all the complicated feelings leaving involves. The consequences of leaving, of trying to return. The distance—both literal and figurative—moving away from California created, fueled the yearning that runs through the speaker for most if not all of the collection.

Alvarado: Where, when, and how often do you write?

Torres: I write, mostly, at my dining table downstairs. I sit my laptop on this plastic, sky blue table cover that I bought at Party City, that should’ve been used for just one weekend. It’s been there for several months now. Writing happens in the mornings when everyone else is asleep. I plug in my headphones, listen to a lofi hip hop beats channel on YouTube to get in a kind of “zone,” and go until I hear my daughter wake up. Depending on the day/week, I’ll write from about 4:30-ish to about 6:00-ish in the morning. I don’t often write at night since I believe my creative bandwidth has been reached by about 5:00 PM. I’d say I write, like literal typing, an average of four times a week. When I’m not typing-writing I do other things that contribute to my overall artistic self. For example, I listen to or watch interviews of other artists and creatives; I go for runs; I play with my daughter and wonder a lot about how she views and understands her expanding world, how things that have been common to me for a long time, like the sound of a train horn echoing through our valley, are so very fascinating to her.

Alvarado: How did your writing process change over time while writing An Incomplete List of Names?

Torres: I learned to be more patient with each poem, with the idea that a poem, if given enough time and attention will, hopefully, eventually, reveal itself to me, reveal what it needs from me. There are tactics I had in revising (like printing out the draft and cutting up the lines to rearrange) but that all directed me towards patience.

I think of writing as watering a garden … I give as many poems nourishment as I can.

My writing process has changed so much in the past year with the birth of my daughter. I currently probably have between 15 to 20 poems that are in various states of revision. I have a nonfiction project that I worked on this spring then stayed away from all summer, and am only now diving back into. What’s different is my relationship with time. Maybe, before, with that wide open span of time each day, I would/could wrestle with a poem for a while, stubborn as I was to write something meaningful, determined as I was to grow as an artist. Now I think of writing as watering a garden, or what it might be like to do that because I’ve never tended a garden. I give as many poems nourishment as I can, about every other day. Over time, each, I imagine, will do what it should do—grow, twist, and bloom at its own pace. My responsibility is to be present when I’m there in front of the page, to recognize what I should cut away, what I should cup with my hand.

Alvarado: What was your hardest poem to write?

Torres: Probably the All-American Mexican poems, and specifically the longest one, which begins “Here’s a small story about the sky…” Those poems were the most wily. What made them hard to write, and frustrating to revise, was that they were the poems I was most uncertain about. At the beginning, all three were in one huge blob of text. I wanted them to do everything, tackle every problem involving my identities. I wasn’t sure that I could capture all that in a single piece. Eventually, after several months they shifted, as did my understanding of them, and the blob became three poems. I think the original idea came from wanting to write about my father’s fascination with John Wayne when he first came to the US from Mexico. Nowhere in any of those All-American Mexican poems can I find my father now. They are so different from the original draft. I believe that’s a good thing.

Alvarado: What is the best advice that you still use today that someone has given you?

Torres: Once in a writing residency workshop, Mary Szybist asked me of my poem: “What are you not saying yet?” There was more to that poem, some bit of truth I’d yet to explore. This moment made me realize how long it can take to build up the imaginative courage to venture to those truths we often keep so far away.

Michael Torres is the author of An Incomplete List of Names(Beacon Press, 2020). An Assistant Professor in the MFA Program at Minnesota State University, Mankato and a teaching artist with the Minnesota Prison Writing Workshop, he lives in North Mankato, Minnesota.

Moncho is a Cihuayollotl trans woman Xicanx poet, translator, visual artist, and educator. She is the author of Greyhound Americans from Saturnalia Books. She has been published in Meridian, Foglifter, Emerge Lambda Fellows Anthology, Poets.org, and other publications. She is a recipient of fellowships and residencies from The Helene Wurlitzer Foundation, Lambda Literary, Poets House, Troika House, and more. She spends time between Queens, NY with her partner and Pacoima, CA with her family. 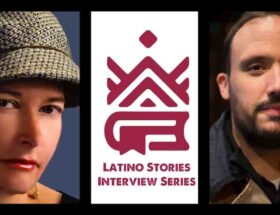