Moncho Alvarado interviews Claudia Delfina Cardona about her debut poetry collection, What Remains. The interview is part of a series with Latino Latinx authors.

Moncho Alvarado: What is the most surprising thing you discovered while writing What Remains?

Claudia Delfina Cardona: I was mostly surprised by how lost some of my poems were. I had to really connect to myself at the time I wrote those older poems and what my intentions were. It’s hard figuring out what you really want to say. It can be a little scary investigating your motivation for writing a poem. Some I can definitely pinpoint, others are more obscure. It surprised me how much I strayed away from my original intent while I was revising old poems. Ultimately, it felt really good to rediscover my old feelings and thoughts in new ways.

Moncho Alvarado: What was the most challenging part about writing your collection, What Remains?

Claudia Delfina Cardona: The most challenging part of writing my collection was revision. It was so hard for me to be compassionate towards older poems. I often wanted to inject more recent details or alter the poems entirely, which I did do for one or two older poems. Meeting my older poems halfway was difficult, but it was important to my book’s heart to keep those feelings intact and archive them as best as possible, just with a little more polish.

Moncho Alvarado: Who is your most trusted reader of your work and why?

Claudia Delfina Cardona: My immediate answers are Juania Sueños who wrote the introduction to What Remains and my friend, Melanie Robinson, an incredible poet from San Antonio. I met both Juania and Melanie at Texas State University, and I felt an immediate kinship with both of them. Melanie is a master of form and experimentation. She’s able to see poems in ways that feel totally foreign to me, and I appreciate it so much. Juania is a Pisces and incredibly in tune to what is being said and not said in a poem and where the heart is. She’s also a Chicana, so there’s an understanding on that level as well.

The most challenging part of writing my collection was revision. It was so hard for me to be compassionate towards older poems.

Moncho Alvarado: What was the biggest impediment to finishing What Remains?

Claudia Delfina Cardona: I think my biggest impediment was trying to figure out what my book was about and the book’s arc. The first draft of What Remains came from my MFA thesis, “Temporary Tattoo,” which had a larger focus on astrology, rejection, and heartbreak. What was my impediment was also my blessing because through revision, I realized that I wanted the heart of What Remains to be about family, place, loss, and preservation.

Claudia Delfina Cardona: I always think about what my father told me once which is: the universal is in the particulars. I think the quote is from someone but I always attribute it to my father who is also a poet. When I first started writing poems in high school, I wanted my poems to be like Bright Eyes’ lyrics, I wanted to reach this perceived universality. But my high school poems were bad because of that reason! I wasn’t being specific. At the time, I didn’t believe in myself nor saw my experiences represented in stories or poems. I have way more fun in poems when I am ultra-specific, mentioning grocery store names like H-E-B or what songs I am listening to. Those specifics really help me build the world of the poem.

Claudia Delfina Cardona was born and raised in San Antonio, Texas. She received her B.A. from St. Mary’s University in English Communication Arts and her MFA in Creative Writing from Texas State University. Her poems have appeared in journals such as Apogee Journal, Cosmonauts Avenue, Salt Hill Journal. She co-founded (alongside Laura Valdez) Chifladazine, a zine that highlights creative work by Latinas and Latinxs. With Linda Rivas Vázquez, she also co-founded, Infrarrealista Review, a literary journal for Texan writers.

Moncho is a Cihuayollotl trans woman Xicanx poet, translator, visual artist, and educator. She is the author of Greyhound Americans from Saturnalia Books. She has been published in Meridian, Foglifter, Emerge Lambda Fellows Anthology, Poets.org, and other publications. She is a recipient of fellowships and residencies from The Helene Wurlitzer Foundation, Lambda Literary, Poets House, Troika House, and more. She spends time between Queens, NY with her partner and Pacoima, CA with her family. 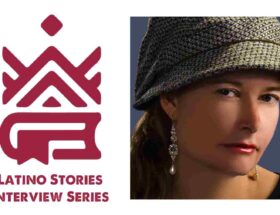