This interview with Laurie Ann Guerrero is part of a Latino Stories series with Latinx authors. Poets & Writers Magazine named Guerrero one of 10 top debut poets in 2014, the same year she appeared in our Top 10 New Author List. Her work has received various awards including the 2007 Panhandler Chapbook Award, the 2012 Andres Montoya Poetry Prize from the Institute of Latino Studies at the University of Notre Dame, the 2016 Helen C. Smith Award for poetry from the Texas Institute of Letters, an International Latino Book Award, and has been listed as must-read works of Chicano literature.

Salvatierra: “Ars Politica: How to Make Art” is a strong political poem; how do you approach the blending of political activism with the formation of art?

Guerrero: I read the phrase, “The personal is political” when I was a teenager—I was reading an interview with or a piece on Gloria Steinem in a (YM –Young & Modern, I think) magazine a girlfriend had a subscription to and would pass along to me when she was done reading them.

I sat with this phrase for a while, and, while the writers of the mag and their subjects were very white, I began to apply this idea to who and what I knew growing up in the Southside of San Antonio. While I did not grow up in a very political family, it was clear to me that the truth of what was happening—even inside my own home: the blatant sexism and racism and classism, all of it internalized, which made it so that my own people held themselves in some unchallenged, normalized oppressions—was in fact a symptom of what was happening outside the home in fields and factories and schools and and and… The normalization of oppression meant that every single thing any of us did to counter these traditions was political. And it still is. I tell my students all the time, most of whom are Latina, that even writing—just writing, despite the subject—is an act of resistance. That said, I don’t necessarily set out to write political poems. But the personal is political; all of my poems are political.

In “Ars Politica,” a poem I wrote feeling a sense of unity with the working artists of my city—who’ve grown up like me & who know inherently that the personal is political—in response to the continued question I was getting when I was Poet Laureate: “How do you make art, write poems? What’s your process?” This question seems silly to me. Ridiculous, even. I just write what I see—or write until I can see clearly. But in this poem, I hoped to note the other inheritances we have, not just the internalization of isms. Celebrating the who and where we come from is also political. And I know I come from people who know much more than I do.

Writing, despite the subject—is an act of resistance.

Salvatierra: All your books have great titles. What is your book title process, particularly for the last one: I Have Eaten the Rattlesnake: New & Selected?

Guerrero: Ha! Thank you! I have been told my titles are too long, to suggestive, too blah blah blah. Coming up with titles is one of my favorite things! It’s like naming a baby or a dog or your truck! This latest book, I Have Eaten the Rattlesnake, comes from a line in the poem “The Plight of Lovers,” in which the speaker outlines what she’s offering and what she never will… that she’s deliberate with herself and not afraid to lose. She reminds the lover to “be worthy / I have eaten the rattlesnake.”

…but the line alludes to the very first poem in the book, “On Eating Rattlesnake,” in which the speaker recalls eating rattlesnake with the men in her family

When these two poems were finalized, I realized how they also represented my journey, not just as a woman, but as writer. I had been grieving for so long after the death of my grandfather—I made a lot of bad decisions, I stopped writing the way I used to, I let too many voices in my head—I couldn’t hear my own voice. The rattlesnake is truth. It’s courage. It’s deliberate and unapologetic. And I had already fought this fight as a child. No lover, no institution, no anything, was gonna claim my win.

Salvatierra: How did attending Smith College, a liberal arts women’s college, shape your approach to art?

Guerrero: When I was at Smith, among my closest group of friends—all nontraditional-aged women—there was among us a biochemist, an algebraist, a philosopher, an economist, a sociologist, an anthropologist, and me, a poet (yes, these were also my drinking buddies). This was how our professors referred to us and how we learned to refer to each other. These same professors insisted we call them by their first names. We were colleagues. We were all working together toward the advancement of women. This instilled in me a very new way of looking at myself.

At Smith, I was not only expected to know where I stood on issues in class and in the news, but I was expected to know exactly why I stood where I did. The level of expectation for all of us was one of excellence, and more than once, I was humiliated in front of a very privileged classroom full of women when I had nothing to say. It was a very different world than the one I grew up in—a male-dominated one that encouraged me to be quiet, to be still, to be obedient.

It was at Smith, I am both ashamed and proud to say, that I learned about and read the work of Gloria Anzaldua, Audre Lorde, Adrienne Rich—writers whose work guides my own. It was there that I even learned about a San Antonio poet, Carmen Tafolla, who would become my dear friend in the following years and the inaugural Poet Laureate of our city. These were just not names I knew having gone to school in the Southside of San Antonio.

So how does that shape my approach to art? I think of my classroom, which is as much a part of me as my poetry. In my classroom, we’re all writers. I have high expectations. I insist my students call me Laurie Ann: we are colleagues. That’s first. And I teach now at Texas A&M-San Antonio in the Southside. I know many of my students have aversions to much of this… as I did when I first started at Smith. But I also know how it changed me—how I carried myself, how I didn’t doubt myself when I spoke, how my work was as important as everyone else’s. Smith helped me understand the value of my mind, and it gave me the language and the tools to articulate it, and it helped me understand my right to do so. That’s what I strive for in my own classroom, where probably 99% of my students and I share some intersections of our identities and histories.

Salvatierra: Some of your poems have titles in Spanish; how is the Spanish language part of your poetic process?

Guerrero: I am not a fluent Spanish speaker—and the debates I have gotten into with those who can’t seem to wrap their heads around colonization! But I do use Spanish in my work, in the content and in the titles, when it feels necessary. I use Spanish when I am quoting an elder, when I am invoking their voices. This is true to voice of the poem. And true to the experience in a Tejano household.

Now I know I want to publish because I understand the importance of women like me writing. Of all othered people writing.

One poem, however, “en las costillas de la página,” a poem from A Crown for Gumecindo, I had originally titled in English, “In the Ribs of the Page.” But that title was shit and I knew it. When I read through during revision phase, by the time I get to that poem, I am in direct conversation with the ghost of my late grandfather, and it was almost like he was sitting across the table from me as I read it all out loud. I could hear him say these words back to me in Spanish. Every time I got to that poem, throughout the revision process, he was there, and I couldn’t hear the title in English anymore. It was almost as if he was asking, is this for me? Yes. And “in the ribs of the page” made less sense to him than “en las costillas de la página.” Suddenly it wasn’t shit anymore.

Salvatierra: What is the most important lesson you have learned throughout your journey as a poet, and what advice would you give to young Latinx poets as they construct their identities through the creative process and the publishing world?

Guerrero: I think the most important lesson I have learned throughout my journey as a poet is that when I am completely honest with myself in my writing, when I am not trying to be like or sound like anyone else, or write for this publication or that prize, that is when my voice is at its purest. When I stop comparing myself to others, when I stop caring about what’s on social media, when I strip all that away and remember that I was once a shy teenager who wrote and wrote, unprompted, with laser-focus. I wrote so much I had to be reminded to eat. I filled journals and wrote poems and, though I was a loner, this was what made it so that I knew who I was, what  I wanted. There was no praise then. And that was a good thing. I dissected and questioned and descended until I could make sense of the world. And my place in it. I keep a photo of my 15-year-old self on my refrigerator to remind me of that time when. To remind me how little I needed. To remind me why I write.

When I think about publishing, which was, of course, a goal (even as a teen, though at that time it was as far-fetched as my wanting to record an album with Pat Benatar), I understand now how the impetus for that was needing to feel respected and to be listened to—that which eluded me in my little part of Texas. Publishing meant to me that those outside of my world, at least, thought I might have something important to say … and this might make those closer to home listen more attentively … maybe give me the respect I so desired as a little brown girl from the poor side of town. Maybe there was prophesy in this. But now I know I want to publish because I understand the importance of women like me writing. Of all othered people writing. And the getting back to how and why you started writing in the first place, all that courageous honesty, is the kind of writing we need to keep sharing.

Laurie Ann Guerrero, born and raised in the Southside of San Antonio, is the author of four collections: Babies under the Skin, A Tongue in the Mouth of the Dying, A Crown for Gumecindo, a collaboration with visual artist, Maceo Montoya, and I Have Eaten the Rattlesnake: New & Selected. In 2014, she was appointed by former mayor of San Antonio, Julian Castro, Poet Laureate of the city of San Antonio, and in 2016 she started her tenure as Poet Laureate of the State of Texas. Other honors include grants from the Artist Foundation of San Antonio and the Alfredo Cisneros del Moral Foundation. She is a CantoMundo alum and member of the Macondo Writers’ Workshop.

León Salvatierra is a Nicaraguan poet and the author of Al Norte. He holds an MFA in Creative Writing from UC Davis and a PhD in Latin American Literature from UC Berkeley. 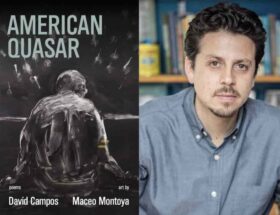